Erection: Live at The Spinning Top

on June 15, 2022
Got the train out of Crewe on a warm sunny June evening... fucking summer is here at last!! The Spinning Top isn't hard to find... out of the station, up to the A6 and down the hill. Tiny place on your left ... I was actually surprised at how small the place was.  Its early and quiet... I get a beer at the bar and chose a great seat.. right near the front. Music is playing in the background and I'm already dancing in my chair to The Slits Typical Girls as I relax with my first beer of the evening.
The bands start to arrive and this is an intimate gig, everyone is saying hi, hugs all around.  Julia, who had previously ordered my zine online gets her swag bag! We all chat for a while and the atmosphere is warm, inviting and very friendly.  In fact, as the evening progresses, I feel like I have chatted to most people in the venue that night. 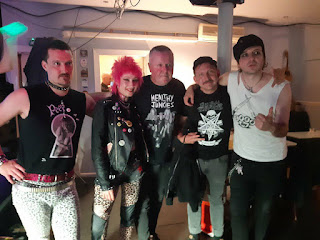 There are three bands playing tonight.  The first band, The Parallel States come on at around nine. They are pop-punk at its best.  FFO Green Day, Blink 182, The Offspring, these guys from Notts are power chord and strong melodic punk.  People are dancing already and the night has only just begun.  Gakk take to the stage and we get a completely different style of punk that seems more reminiscent of the old style punk of the late 70s.  The vocals are edgy and the guitars dirty.  Every song is upbeat, in your face, no holes barred, pure punk attitude.  They've travelled in from Ireland to play this gig and they are giving it full-on to the Stockport crowd!! 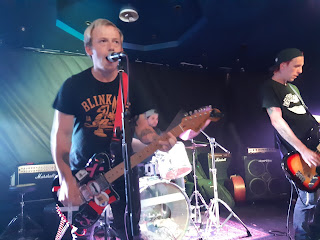 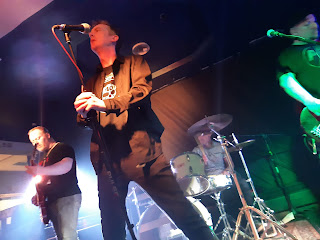 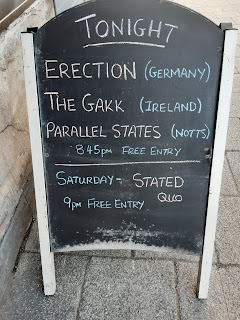 The evening seems to be flying by but I can't wait for the gang from Erection to get on stage.  I first discovered these during lockdown when I had nothing better to do than sit at home checking out new music and I really buzzed off this little gem I unearthed.  Julia and I got in touch on Facebook and I ran a page on them in my Zine #003.  We chatted at the time about how their song, Bottles for Wings was about a bar man and close friend of Julia's who had died, but how the song had become quite metaphorical for the shit times we were going through during the pandemic and how we felt that the live music scene was dying.  But tonight, the resurrection has come and after two long years waiting, I'm finally getting to see them play a live show.  As you can see from the pics, the band look every bit the part as punk as punk can be.  They're over from Germany and there is definitely a European feel to their image and Julia's bright pink hair brings colour and joy to the aesthetics of their gig. 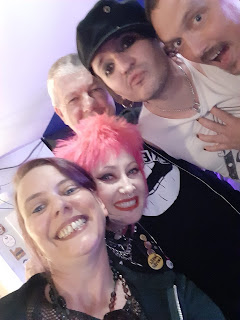 The music is loud, so fucking loud and as usual, I'm dancing right next to the left PA speaker! They kick off with their punk rock anthem... Fuck You!  And the audience sing along, middle fingers raised in the air.  The fuck you to the hegemony... A fuck you to anyone that has pissed us off.... a fuck you we all needed to shout.  Each track edgier than the previous, there is a sexual energy to the show.  A raw lust for the music being played, Julia is grabbing her crotch and the boys of the band are sweating from the intensity of their playing, Julia and guitarist Schtifn J Firebird lean in for a quick snog between songs.

The band describe themselves as Pussy-penis power punk!  This is sex, this is the future, this is rock 'n' roll! 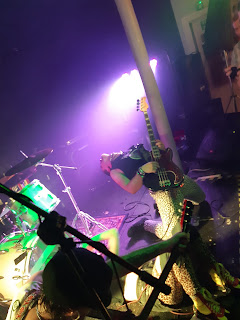 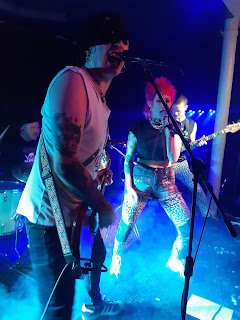 Then my special moment comes when Julia dedicates Bottles for Wings to me and jumps off stage to give me a big hug before going back up and nailing every god damn second of the tune that first brought me to this band.
I'm buzzing and the band are still playing when I have to slip out into the night to get my last train home.  I'm gutted I can't stay right till the end and really fucking wish that the stupid British train companies would realise that not everyone wants to go home before midnight on a Friday and put some later trains on!!
Thanks for reading
Marina xxx
Please help support this site by either buying something from my bandcamp site:
https://marinaisred.bandcamp.com/
Or becoming a Patreon
https://www.patreon.com/Marinaisred
And don't forget to check out Erection's music:
Gig Reviews Gigs Marina is Red Events Zines