The Offspring: Why we love them and you should too!!

on March 23, 2022
In November 2021, I finally got to see The Offspring playing at Manchester's AO arena.  I say finally because, although I've loved them for the best part of 30 years, I have never seen them live.  I know!!  Totally shameful.  Anyway, shameful admissions aside, since the release of their 2021 album, Let the Bad Times Roll (LP) and the gig, I have been revisiting their back catalogue.  There are some absolute gems in there but it's not just about the music.  I actually really like this band for many other reasons. 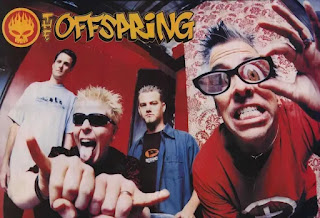 A Great Back Catalogue

Without a doubt, the music is what first draws you to a band.  I remember rocking out to Self Esteem at the rock discos during the 1990s and putting on tunes like Dirty Magic from their first album before grabbing my surf board/ skateboard to get totally pumped up and ready to take whatever the day of board riding brought.  They were regularly playing in the background on skate/surf videos that would constantly be on in my shared studentesque surf house... sand all over the floor, boards dumped everywhere and anywhere, music battles going on between the 5 bedrooms in the house.
I would find it really difficult to pick out even a top ten favourites from their 10 album repertoire.  There is definitely a sound unique to The Offspring which features prominently on each album.  They sometimes mix things up a bit and add in some latino sounding brass sections and the California connection to the music of the barrio is prominent. The front cover of their 2021 album, Let the Bad Times Roll (LP) uses the Mexican Day of the Dead imagery.  The title track from this album is a great to dance to while trying to forget the 'bad times' of the covid years.  Bad Habit and Nitro are certainly ones to get some good cardio in and will have you bouncing around whatever room you are dancing in, for me, always the kitchen!  Gone Away is a beautiful and heart wrenching ballad, dealing with the pain of grief.  Originally released as a track on Ixnay on the Hombre (LP), the band have slowed the tune down and it is now a piano ballad on the latest release.  Dexter's solo performance of it on a grand piano at their gigs is truly something.  I went to the show after losing a close friend and I didn't even fight back the tears, I let them flow as I sung my heart out with Dex.
Turning into You is one of my favourites.  Musically really strong with powerful melodies, the lyrics suggest that we often lose ourselves when we get into relationships.  What Happened to You is definitely for the ska fans, the up-tempo beats are a hats off to the punk ska fusions that were happening throughout the 80s in London's punk scene.  Perhaps influenced by The Slits?  You're Gonna Go Far, Kid! is one to start your day with, "Hit 'em right between the eyes".... it's the ultimate 'I'm gonna be super productive today'... as Dexter says "Dance, fucker, Dance!" It will stick in your head and you'll be dancing to it all day as you make your way through an energised life.

I love the lyrics

I've mentioned above the lyrics... but they don't just get me pumped or teared up... I feel really comfortable listening to the lyrics of ALL the tunes.  There have been all-boy bands that I've liked the music of, but hated the groupie glamorising and misogyny in some of the lyrics. (Skid Row / Guns n Roses, for example).  What set The Offspring apart from that is that they never objectified women.  The aforementioned Self Esteem turned previously accepted gender roles around . Those of us who grew up in the 80s were always taught that men were the sexual predators and they were the ones to use women for sex, making her the victim of their "moves" to get her into bed.  The Offspring broke this concept by placing the protagonist of the song (could be Dexter himself, but also let's consider it could be fictional and Dexter choses to sing in the 1st person singular to add realism to the narrative) as the victim to her late night, drunken, booty calls.  He admonishes himself each time it happens and tells us that he can't say no, "when she's ready to go" because he is "just a sucker with no self esteem".
Jump forward a few decades and the song We Never Have Sex Anymore, is included in the tracklist of their 2021 album.  In my imagination, "I" or Dexter, got the courage to finally make things official with that girl and ended up marrying her.  Ironically, as time has gone on, their original passion between the sheets has gone and he seems to long for the way she used to treat him when she was using him in the 90s.

The Dexter and Noodles show

Without a doubt, this is a band that not only can produce great records, one after the next and have now 10 albums worth of great music in their catalogue.  The remaining members of the original line up, Dexter (Lead Vocals, Guitar & Piano) and Noodles (Lead Guitar and vocals), put on an amazing show.  Dexter has a helluva pair of lungs.  The melodies in all the songs are strong and his range is impressive.  He hits the highs and growls the lows with perfection.  The fast pace of 90 percent of their songs would be hard for the youngest of performers to play, but these guys have been at it for nearly 4 decades and they seem to get stronger.  The chemistry between them is tangible when you see them perform. They buzz off each other, there's cheeky humour interaction throughout the show and each knows when to step back and allow the other their time at the front of the stage.  Noodles 'noodling' his way through their cover of classical favourite In the Hall of the Mountain King whilst also cracking out some classic rock riffs, just to get the audience all wound up in a frenzy.  True professionals, I'm not aware of either of them every having gone down much of a self destructive road and the healthy glow and energy they bring to the performance suggests that these guys actually look after themselves pretty well.

Dexter would make the ideal husband

So, this is a bit of my joking/not joking bit, but wow, when we watched The Offspring videos on MTV back in the 90s, I had a crush.  Dexter was well cute with his long dreaded hair and cool punky look.  Even now, in his 50's the guy has still got it.  I mean, what girl couldn't fall for him?  And it's not only a looks thing.  An amazing musician, who has his shit  together, has produced 10 great albums, dresses really cool and has an immense presence when performing or just chatting things through at an interview, but he's actually really super brainy too.  At the same time as writing 10 albums, touring extensively, he has just got his PhD in Molecular Biology.  His thesis was titled

"Discovery of mature microRNA sequences within the protein-coding regions of global HIV-1 genomes: predictions of novel mechanisms for viral infection and pathogenicity"

And the guy created his own hot sauce, Gringo Bandito, which suggests he is a dab hand in the kitchen and could cook me up some of my favourite spicy mexican food, but I also get the impression the man after my heart speaks a few languages too. His cover of the aforementioned We Never Have Sex Anymore/ Guerre Sous Couvertures song in French is rather sexy.  So Dex, if you're still single (doubt it) and you fancy taking on a British Riot Grrrl, I'm sure we could sort something out.... Just joking, or am I??  Check out my cheeky chappie crush boy being interviewed: