In search of Spain’s Riot Grrrls: The impact of gender-inequality on the Spanish alternative music scene from 1975-2020.

This is the title of the PhD that I am working towards at the moment through Manchester University.  I began the research in January 2022 and am working towards this on a full-time basis.  Below, I have included the proposal that I wrote as a part of my application process and I would invite you all to have a read and consider if and how you would like to get involved in the project.  I am particularly looking to interview anyone involved in the Spanish music industry or people who have specific memories of the development of the punk scene either in Spain or globally.

The research will establish how underrepresentation and negative representation of female identifying and LGBT+ musicians in the Spanish press has impacted on the Spanish alternative music scene.  It will critically analyse song lyrics as an expression of counter-stories against the mainstream narrative.  The PhD will consider global trends in feminism and how they manifest in Spanish society.  In particular it will address the claim of egalitarianism within the subcultures of punk and riot grrrl, and consider if the alternative music scene is a model which could be emulated by the mainstream in pursuit of Equalia, a term used by Catherine Mayer to describe a possible utopia of a “gender-equal future”.  Furthermore, the PhD will investigate to what extent the female identifying and LGBT+ musicians have had to look internationally for musical, ideological and lyrical influences.

From a methodological point of view, it will be necessary to utilize the expanding technologies available within digital humanities.  The first challenge will be to establish the best tool for text mining, I will need a higher level of sophistication than Google’s Ngram, and I have identified both NVivo and NLTK as possible software tools, however, my level of expertise is low and I will need some training in this area of methodology.  It is my intention to learn to use text mining to facilitate the creation of a digital database which will contain an exhaustive list of alternative artists in Spain with female identifying and LGBT+ musicians.  I will mine publications (including all mainstream music media, Spanish newspapers, independently produced fanzines, and online blogs) and look for patterns in the discourse used in articles about female identifying and LGBT+ musicians, which will thus be included in the database.   From earlier investigations, my hypothesis is that the vocabulary used will differ from the lexical language choices of writers reviewing bands with soley heterosexual male musicians. The research will facilitate a deeper understanding of the impact of such discourse. Furthermore, the database will contain a critical discourse analysis of the song lyrics written by the artists in order to view how female identifying and LGBT+ musicians have created counter-narratives.  From a theoretical point of view, I will use Norman Fairclough’s ideas on how discourse can be key to social change and Hilde Lindemann Nelson’s notions of Narrative Repair of Damaged Identities.  I will also use internationally acclaimed key feminist writers, such as Simone de Beauvoir and Germaine Greer, but will also consider the arguments put forward by the more modern feminists such as founder of the Women’s Equality Party in the UK, Catherine Mayer, who’s book Attack of the 50ft Women, is key to understanding the “mechanisms in society that hold women back” and which also addresses intersectionality within the feminist ideal.  I will also consider ideas put forward by Helen Reddington, Catherine Strong and Marion Leonard on issues surrounding music, gender, identity and memory and how women are more likely to be lost in the recording of musical history.

The research proposed is unique.  While writing my master's dissertation, I established that very little investigation has been done into gender equality in the Spanish alternative music scene on an academic level (with Laura Vinuela Suarez’s article on women in mainstream music being an invaluable point of reference) and where this PhD is concerned, I have found no other similar study.  The conclusions that I drew for my MA dissertation relied heavily on Mimi Schippers theories of Gender Maneuvering and empirical evidence.  While I will continue to gather ethnographic research, the anecdotes given will be better supported by the database mentioned above.  I am hoping to carry out field work throughout Spain, the UK and the USA to gather this ethnographic research. 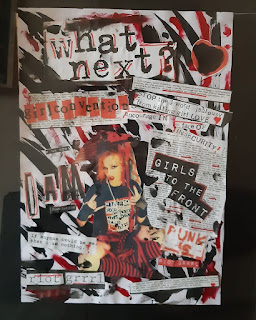 The timeframe for the research has been chosen specifically to coincide not only with the Spanish transition from dictatorship to democracy, but also with the emergence of punk music on a global scale.  Furthermore, by the late 1970s, second wave feminism was well established, and the PhD will track the changes in feminism from that time to 2020, where fourth wave feminism, including intersectionality and the global shift towards social media, have facilitated progress.  It will track the effects of digitalisation on the music industry as a whole and will consider the societal impact on the Spanish alternative music subculture.

Furthermore, the late 70’s was when I was born.  The changing waves and trends in the global music scene, I have experienced first-hand.  As the daughter of a professional musician, I grew up surrounded by a wide variety of music.  By the 1990s, when Riot Grrrl had become an international underground phenomenon, I was playing in my own Riot Grrrl band.  I experienced sexism at my own gigs and have continually fought against the inequality that is still prevalent in the music industry.  I run my own blog which is an intersectional feminist online zine which aims to promote musicians from throughout Europe that are often overlooked by the mainstream press .  As an avid music fan, my record collection is (counter to global trends), dominated by female and non-binary musicians ranging from the 1960s to present day.  I have interviewed many bands and am open to dialogue with all active participants in the music industry who wish to discuss how to work towards a gender-equal industry.   While researching my Masters, I won a grant from Santander bank to travel to Spain to carry out research.  I spent two weeks in Spain interviewing a wide variety of musicians, zine writers, music photographers and music industry professionals.  The network of contacts that I established during my time will be invaluable to my PhD research.  The study of any subculture requires a level of authenticity on the part of the researcher.  In my opinion, there is no one who could undertake this study with the same level of commitment, passion and originality that I can bring to the investigation.

This research is fundamental.  While progress has been made within feminism, we are still far from Catherine Mayer’s aforementioned Equalia.  From a socio-political point of view, music is influential on the personal lives of nearly everyone in western society and can be key to changing attitudes, which in turn can change political policy, as Riot Grrrl pioneer Kathleen Hanna pointed out in her interview with Mojo magazine: “You have to change the culture to change laws”.  The earlier generations of alternative rockers have now grown up and their legacy is shaping change.  Take Catherine Meyer as an example, she is married to guitarist Andy Gill, who’s band Gang of Four were key players in the UK’s underground post-punk scene.  As she argues, “the personal is political” and in the music industry where sexism, exploitation and negative representation of minority genders is endemic, research must be done so as to not only strengthen the debate in favour of representative quotas in a cross section of media but also to bring about positive change where musicians of oppressed genders “take over the means of production in order to create our own meanings,” as Kathleen Hanna pointed out in her 1991 Riot Grrrl Manifesto.  Whatmore, the dichotomy in dialogue within the alternative rock scene, where some believe it to be an egalitarian subculture, (look at Craig O’Hara’s text: The Philosophy of Punk) reveals a false illusion that may be a microcosm of the global belief that, because there have been shifts in trends, the feminist fight is somehow won.  In particular to Spain, while there has been significant change in political policy to end domestic violence, to level the gender pay gap and to create more opportunities for different genders over the last forty years, Spain is yet to see a female in the top position of government; there is still much progress to be done in terms of maternity and paternity pay; Rock Estatal Music magazine has only ever featured one woman on the cover of the 37 editions they have published and; where, key to this discussion, I have yet to find a Spanish version of the Riot Grrrl leader, Kathleen Hanna.

Thanks for reading.  Remember, if you would like to help sponsor my project, please take a look at my Patreon page.