Bilateral musical relations between the UK and Spain (1960-2000) 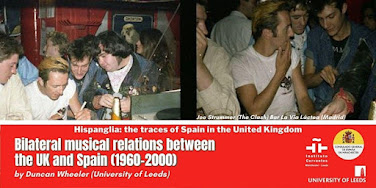 Having just attended Duncan Wheeler’s online seminar at the Instituto Cervantes and being mightily impressed with the information contained in the seminar, I thought I’d put down some key points I thought to be important to my studies, and some interesting facts that may need exploring on a deeper level. Firstly, Wheeler was invited to give the seminar with the idea that he would talk about the influence that British rock and pop had on the Spanish music scene, however, Wheeler thought that the one-way flow was too restricting and decided, therefore, to give more weight to the term ‘relationship’ as a two-way interaction and the mutual influences between the two nations, musically speaking. Interestingly, he pointed out that on a wider scale, the British were more likely to dismiss Spanish rock and pop and cited gimmick songs like Las Ketchup Asereje and La Macarena by Los del Rio as examples for why this may be the case. Furthermore, Wheeler put forward the notion that the British tend not to be used to listening to rock and pop in languages other than their own, and also, the term ‘Euro-pop’ has also become condescending within many social circles. Oh no! Not Cliff Richards! To kick off proceedings, Wheeler invited us to listen to two examples of songs where Spanish music had influenced British artists. I must admit, I was not expecting to listen to Cliff Richards at a Duncan Wheeler presentation, but hey, we did! Cliff’s album, When in Spain (LP), is a compilation of songs sung by the man himself in Spanish. Top marks to Cliff on his good Spanish pronunciation, but as Wheeler pointed out, many of the songs did not actually come from Spain, but were instead, Latin American in origin. The second song we listened to was Elvis Costello’s Radio Radio, covered in Spanish with the collaboration of Fito Paez. A relatively recent addition to the Anglo-Spanish musical relationship, but all the same, significant that these songs have been translated into Spanish or the lyrics re-written by the collaborative performers.

So, when did British rock music start influencing the Spanish? It would be hard to pinpoint an exact date. There were certainly times when British bands, like the Beatles, visited Spain over the years. However, Wheeler highlighted the cultural shift during the transition which ran from the death of fascist dictator Franco (in 1975) to the establishment of a secure democracy in the early 1980s, like a key turning point for when Spain as a nation started to accept a flow of British bands to play concerts. The Rolling Stones' first gig in Spain was on the 11th June 1976, 7 months after Franco died. The promoter of the gig ran it as a loss-leader, Wheeler told us, with the venue being only half full. His explanation for this was that the tickets would have been exorbitant for the average Spaniard and encouraged us also to consider that the act of going to gigs was something that people do out of habit. There had not been sufficient concerts happening then, for people to have got into the routine of going to shows. What's more, Wheeler told us that the gig ended when riot police charged the crowd with tear gas for no apparent reason. It seemed, according to Wheeler, that the Spanish were not used to gathering in large groups and still learning to co-exist in culturally free spaces. Surprisingly, Wheeler mentions how often pub rock band Dr. Feelgood played in Spain over the years but attributed this to one of the member’s parents having a house in Almeria and the neighbour was a melon exporter, therefore, the transaction of turning pesetas back to pounds was facilitated by this connection, not available to other musical groups at the time. Spain gets going: La Movida However, the real breakthrough came in the late 70s in Spain with the emergence of La Movida, a cultural wave connected with punk and centered around the party scene that was happening in Madrid as the country moved through the political transition. By comparison, Wheeler argues, La Movida was a pale imitation of the British Punk scene. He states it was less aggressive and a lot less politicised. Perhaps unfairly, Wheeler encouraged the audience at the seminar to compare Bailando by Alaska y los Pegamoides, with Anarchy in the UK by the Sex Pistols. He showed us that Alaska’s music was more about celebrating the personal freedoms that they had been denied for so long, while the Sex Pistols tune was a far more aggressive and politicised outpouring of expression.

Later, during the end of seminar discussion, I talked with Wheeler, and he agreed that a better comparison with Alaska in the English-speaking world would be with Blondie, whilst The Sex Pistols had better links with Rock Radical Vasco (a working-class punk movement formed in the Basque Country in the north of Spain in the late 70s). The point that Wheeler was making with the comparison is that in Spain, there were a lot of barriers to working-class people being able to form punk bands. The price of music gear and instruments in Spain was high and therefore, only the middle-class youth culture, who were by this point almost apolitical, certainly on an expressive level, became the more active participants in punk culture. To give an example, Alaska had the economic means for travel. Her punk image came from visiting New York and Vivian Westwood’s store, Sex, on Kings Road in London, where she and her grandmother, apparently, saw Jonny Rotton and chased him down the street to chat to him. The Spanish Civil War in British Music The next video clip we were invited to listen to by Wheeler was Spanish Bombs by The Clash. The Clash toured with and had close personal relations with The Slits, whose drummer Palmolive, was from Spain. She told them the stories of the Spanish Civil War, which undoubtedly influenced Strummer to write this particular song. Also cited were works by The Strangles (The Spain LP) and The Pogues, who both wrote about the atrocities committed during the Spanish Civil War in a bid to celebrate victory over fascism. Bear in mind this victory was not won in Spain at the end of WWII, like in the UK, but in 1975 when Franco died.

By the early to mid-1980s, UK punk bands were touring widely and extensively throughout Spain. The Spanish got into the ‘habit’ of going to gigs and the newly elected PSOE (labour) government began subsidising cultural events, including gigs. Not to mention, as Wheeler pointed out, many participants in the scene were junkies, and the low prices and availability of drugs were a pull for them to go out to the peninsular, play some gigs and enjoy the party afterward. Manchester-Barcelona-Ibiza Wheeler also talked about the emergence of Ibiza as an idealistic venue. Considering this, when we couple that with the influx of tourism through the 70s and early 80s to the island, utopian spaces were created where sex, drugs, and rock and roll could happen freely. By the 80’s the Manchester-Ibiza-Barcelona connection was growing. Wheeler explained that the Q Club in Ibiza became the place for parties and was frequented by the likes of Freddie Mercury, who had already forged strong links with Spain with his collaboration with Montseratt Caballe on the album Barcelona, which was used in the opening ceremony of the Barcelona Olympics in 1992.

Furthermore, the cheap drugs and endless parties attracted throughout the 1980s partiers from Manchester, who were in the midst of their own alternative subcultural wave, and Wheeler tells us that after visiting the Q-club in Ibiza (which was described as Disneyland for clubbers in a C4 documentary), members of New Order went back to Manchester and opened the world-famous Hacienda club. The strong connection between Spain and the UK still exists, British bands play extensively throughout the peninsula and many Spanish bands do gigs in the UK. Recent worker migration from Spain to England has facilitated this and we are, perhaps, yet to see the wider impact that has on music in the UK.