Top Tracks: Post Your Life by The Oversized Groove

Its a song but it asks a question, literally, in the digital sense, every day, say, on average 66.66% of the worlds population post thier every other thought, whim, or craving onto the worlds digital social media playground. We are all guilty of it & some more guilty than others, some live for thier digital reality or realisation. 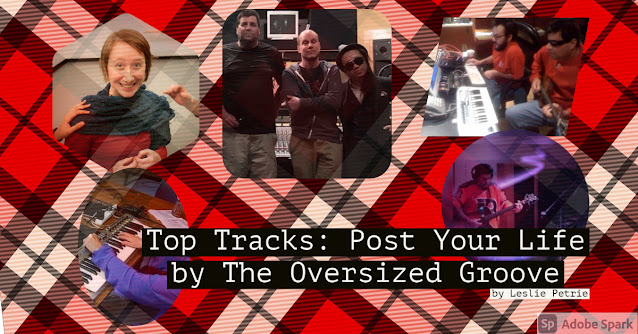 The songs narrator seems to suggest that the subject's celebrity tweets are somewhat virtual in reality rather than grounded in actual reality & the narrator is expendable in the celebrity's subconscious or more aptly digitally unconscious world. Perhaps the old adage is true "we hurt the ones we love the most"

With the inevitable celebrity media bubble being burst "selfily" to coin a phrase. Once information is released to the media, social or not, its in the public domain & the hair gel is out the tube once & for all! Life is Posted.

The lyrics are to that point, beautifully minimalistic, without really going into any specifics generalising that whatever ends up on, Instagram is out thier to be torn & twisted for right or wrong reasons, consumed for breakfast on the worlds social media McDonald's menu.

The female singer comes in gently, very 80s my initial reaction, maybe Kim Wildesque is a compliment, tuneful vocal with just an edge of attitude to give the lyric direction or definition!

Musically the drums (machine) are clean, concise & offer the song a musical framework for the bass to bounce around in. What starts off as 80s oceanic synthesisers for the first couple of bars suddenly ignite when 70s Kraftwerk like industrial synthesisers takeover the dominant melody (compliment two). Other miniature electronic keyboards slide into the mix underneath the guitar that eventually pushes subtly or subliminally towards a growing climax or inevitable musical crescendo. A short but sweet song, to the point, where the music does the talking & the lyrics narrate.

At this point, I would like to add that I had never heard it before, had no idea who the artist(s) were & was given the sing to review which I think I have methodologically. It grows on you, stealthily until before you know it, you've got it on a loop on the background whilst multi tasking until even when you've turned it off its still pleasantly going round & round inside your head.

by
Leslie Petrie BAcc (Hons) MSc
About the author: Columnist Leslie Petrie grew up with punk new wave and is looking to put that type genre band together post covid. She only started singing in the spring as what started as Lockdown Karaoke which has spawned into her own YouTube channel opened up only a week ago.


The song will be released shortly.  Contact Mark Alberici for more information.