Thanks Leslie for sending us your thoughts on 'Crash' by The Dying Lights. 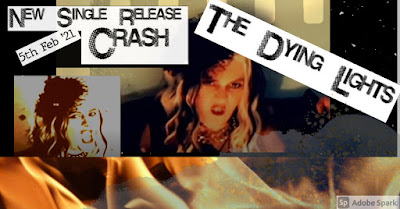 Originality springs to mind from the off, minimal guitars utilised to the max. Great meshing off Tim's  bass, pumping throughout hydraulically alongside the visceral metallic Telecaster, flanged sparingly. As the saying goes "fuzz rules okay." The Fading Lights make great use of ascending & crescendoing musical structures, especially tempered by the drummer. Marina, lightly at times & heavily at others takes control of the narrative. She sings & directs the story sweetly, steering the listener through the emotional storm before the inevitable safe harbour of the finale. Great use of 1920's Ragtime Jazz costume alongside metal fabrication in the video. Is she trying to melt the crown that no one wants to extract the precious metals for her own rewards? Crash seems to suggest a tiredness, when the human lithium batteries are running at 6%.  It's time to reboot the nervous system before it inevitably crashes completely.  We can just pray that the Dying Lights get their chance in 2021 to perform live & give the public the emerging musical justice they deserve. Here's hoping we all get the chance to cruise the "Emotional Freeway" Route 66 from Marina Red & The Dying Lights ❤🖤

What others are saying about the single on social media:

"Dope that mate. Like the best of Hole with some 90s Manics. That Glyn rocking a killing joke top n all? love it" (Eion Walsh)

That chorus though, I love it, proper filthy 90s earworm (Amerlia Vandergast)

I love the melody, you got so much personality DIVAAAAAA