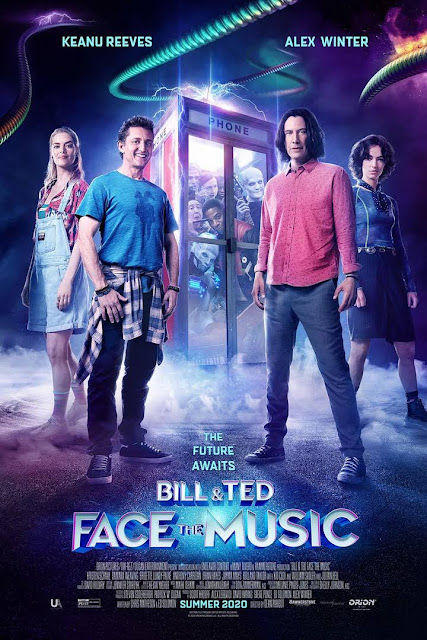 So, BILL AND TED FACE THE MUSIC, the third instalment of a trilogy that took three decades to conclude… is it simple 90’s nostalgia? Like ‘let’s dredge some more cash off of a couple of movies that ‘Generation X’ loved and ‘Boomers’ and ‘Millennials’ might not understand and might bitch about on that there Internet thingy?’ Because God knows, everybody’s so reasonable these days when it comes to something as simple as ‘just a movie coming out...’

Rest assured… BATFTM might not be a classic but in these days when so many films aimed at family audiences are utterly full of violence, darkness and killing (yes, I like many of these superhero movies but some of them I wouldn’t show to my kids… if I actually had kids), it’s just so nice to see a film that is so goofy and good-natured. Even a bit moving in places! And there are a few threads online that are getting a bit upset about how Bill And Ted’s kids were, at the end of the second film, announced as ‘Little Bill And Little Ted’, assuming they were boys and are now their daughters… like ‘it’s gender-swapping, I’m so offended!’ The daughters are now called Billie and Theodora and were, actually, played by twin baby girls in the first place so take that, numpties! ;o)

It’s a lovely fun film that, yes, make some of us original B+T fans feel a bit old. But heck, what doesn’t these days?