"Time had not been kind to him, he was a recovering meth amphetamine addict and it had left a mark."

In mid-July of this year (2020) Ken Chinn better known as Mr. Chi Pig of the Canadian punk band SNFU died. I first met him at a Jucifer show. The venue, Funky Winker Beans is an old 1930’s hotel lounge bar in the Downtown Eastside (DTES). DTES has the highest amount of homelessness anywhere in Canada and as you can imagine is a very run-down depressed area but up until the 1960s was considered the centre of the city. As a result, the evidence of its past opulence is still visible and Funky’s is a remnant, if not dilapidated, example of this. It a long thin room with a bar on the left side and bench seating on the right. The extravagant Art Nouveau melding and Romanesque pillars are still visible around the bar and it is not hard to imagine the velvet covered bench seating when it was an exclusive hotel in a vibrant part of the city. It is now a dive bar which hosts mostly Metal and Punk shows. 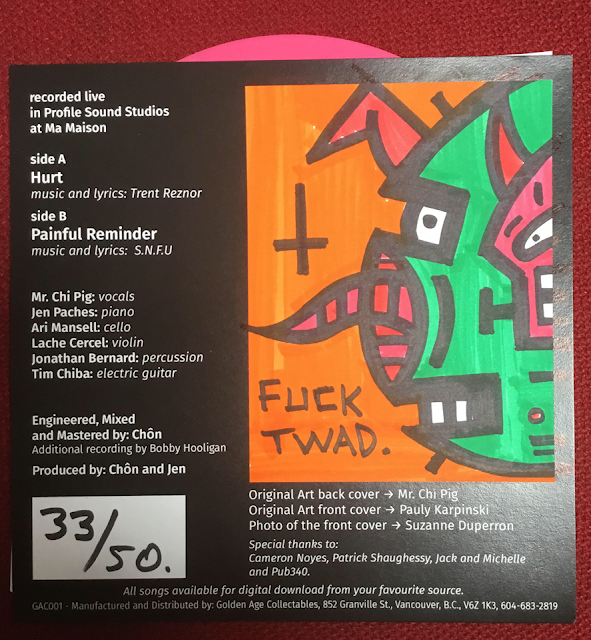 My friend Kyle recognized Chi and said, ‘Hi’. To be honest, he was not difficult to recognize he was a slight guy, with a long grey moustache and patchy beard and a furry hat with ears. Time had not been kind to him, he was a recovering meth amphetamine addict and it had left a mark. I had heard SNFU really only in passing and had been given a tape of the album, “If You Swear, You’ll Catch No Fish” by a girl in art college and I knew the song, ‘Painful Reminder’. (below) He came over and sat with us and I was amazed at how friendly, modest, and charming he was. At this point I did not realize that Chi was gay and had a thing for the larger gentleman and he liked Kyle. I bought his last single, which he had done some artwork on featured the term FUCK TWAD on it which reminds me of that night and makes me laugh.
We chatted and it was an interesting experience, more so for it slowly dawning on Kyle that he was being hit upon. After meeting him I revisited SNFU and they are one of those bands that should have been far bigger than they were. From then on, I ran into him at bars and venues regularly and he remembered my name and would chat with me and my friends whenever he saw me. He spoke openly about his addiction, sexuality, and mental health. He accepted that his life had been shortened but did not live in regret. He was a kind and patent man who would always have time for his fans and admirers, typically drunk middle-aged guys. A feature and icon of the Canadian punk scene and it was always a pleasure and privilege to speak to him. I wish I had known him longer.
He left instructions for this song to be posted posthumously:
Alex is an avid music fan who is from the UK and currently living in Canada.
Alex Minshull Artist Profiles