Interview with Aidan Cross from Weimar

on August 04, 2020
Weimar are an Art Rock/Post-Punk band with an eclectic style incorporating elements of chanson, jazz, funk, alt folk!! They answered some questions for me!! 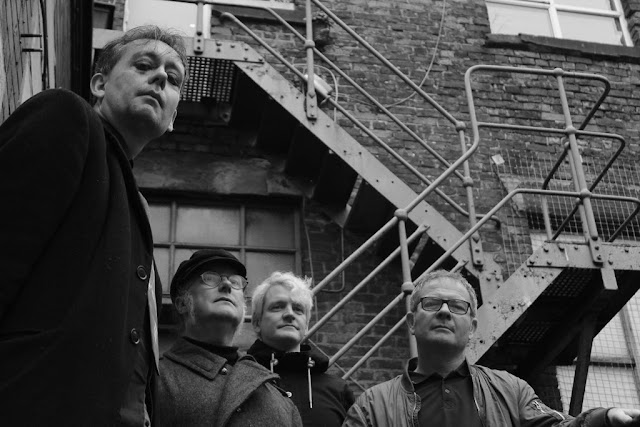 "Lyrically I draw lots of inspiration from the murky underbelly of society, culture and history, and the survival of oppressed factions of humanity in the face of adversity."

My name is Aidan Cross and I am the lead singer, songwriter and rhythm guitarist in the band Weimar. We describe ourselves as an Art Rock band but our music encompasses quite a wide range of styles, with elements of Post-Punk, sometimes touches of Prog Rock, with elements of French Ch'anson, Cabaret, Jazz, Funk, Alt Folk, influences from Music Hall and Dark Circus. Weimar have been going since late 2016 now. Prior to Weimar I was lead singer/songwriter with The Bacillus from 2008-2013 and then spent a while playing guitar for Anarcho-Punk band Black Light Mutants and also collaborated with Freestyle Rap collective Class Actions at a few live performances. More recently I've collaborated with electronic artist The Junta on a track on his most recent album and am working on a few side projects alongside my work with Weimar.

Who or what influences you?

I have a wide range of musical influences - ranging from The Velvet Underground to Marc Almond, Scott Walker, Momus, Leonard Cohen, Jacques Brel and early Bowie, as well as lesser-known artists such as Trevor Tanner, The Bolshoi, Stan Ridgway and Wall of Voodoo. John Armstrong, Weimar's bassist, is very influenced by the No Wave and New York art rock movements of the 70s and artists on the ECM jazz label. Stephen Sarsen, our lead guitarist, takes a lot of influence from 80s post-punk and Indie, particularly The Smiths and Half Man Half Biscuit, while Anthony 'Eddy' Edwards', our drummer, comes from a Punk background and previously played with the Punk band The Deceased - yet his style is extremely versatile and he is able to adapt his drumming to a huge variety of different styles. Lyrically I draw lots of inspiration from the murky underbelly of society, culture and history, and the survival of oppressed factions of humanity in the face of adversity. I sing about the grit beneath the glamour, the real world behind the polished facades. I draw a lot of my inspirations from personal experience as well as that of others around me and take a lot of cues from art, film and literature. As the band name indicates, I am heavily inspired by the Weimar Republic era of Germany in the 1920s, and the cultural movements that flourished amidst the extreme instability of the time. There are certain parallels between that era of history and the present day, particularly now the COVID-19 pandemic has complicated so many things for humanity, and our music emphasises the need for freedom of expression and artistic integrity in times of chaos and uncertainty.

What challenges do you face?

Our biggest challenge right now is obviously moving forward amidst the current global situation, and the difficulty posed by the fact live performances are not currently possible. We have spent the last year in the studio recording our debut album, at Vibratone Studios in Manchester, being produced by Adam Crossley and Chris Guest. The album is very close to complete but how exactly we proceed from here is uncertain just at the moment, with regards to live performances and giving the album the kind of launch we would ideally like. We have been doing a great deal of virtual networking during lockdown, connecting with other artists internationally across Twitter and other social media channels, establishing a great network of support in getting one another's music out there. The process of reaching new listeners, scoring radio play, getting gigs further afield and raising our profile is a challenge generally as it requires a great deal of commitment and investment of our time and finances - but it's worth every moment and it feels great to reach new fans and connect with new audiences.
What has been the highlight of your career so far?

I would say our career highlight so far has been the launch gig we played for our debut single, "John Doe/Curse the Songs", at The Eagle in Salford in February of last year. It was a freezing cold night and there was heavy snow and ice outside, but we played to an almost-packed venue and got a real buzz off the audience's energy. Our gig at Foundations Festival 2019, where we launched our second single "Marvel To The State/Undesirable Master" came a close second - nothing beats the buzz of playing to a great audience.