"I have had a great time playing in bands all my life! Highlights would include things like touring America with my old band, recording in Canada with Gggarth for our debut album as The Empty Page, playing cool venues like The Ritz" 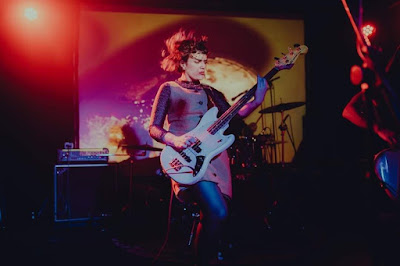 Who are you and what do you do?
Kel from The Empty Page - I sing and play bass and when I’m not doing that I spend most of my time reading, writing, learning, hassling cats and cooking

Who or what inspires you?
So many people and things and art forms all day every day. I’m eternally enthusiastic and into everything. Even things and people I find uninspiring inspire me to not be as dull as they are. I check my privilege a lot, so I don’t like to complain too much about personal challenges because I know that I am very lucky in so many ways.
What challenges do you face?
Challenges generally motivate me and the ones that I can’t put a positive twist on I try not to dwell on too much - of course I do dwell sometimes, but I’ve learned to not fall into the dwell-well if possible as it’s dark down there and hard to get out and I spent a long time stuck there when I was younger. As a band, it’s the usual stuff, trying to raise your head above the sea of other bands to be noticed, trying to save money to afford to go in the studio and all the other costs involved in being a musician and releasing music, trying to find time to do music in between work and family and all the other life stuff... but it’s all pretty mild in the great scheme of challenges faced by humans!
What has been the highlight of your career so far?
There isn’t a single particular moment but so many awesome ones. I have had a great time playing in bands all my life! Highlights would include things like touring America with my old band, recording in Canada with Gggarth for our debut album as The Empty Page, playing cool venues like The Ritz in Manchester, getting played by cool DJs on the radio, and that feeling when you know you’ve written a banger and you can’t stop playing it in the rehearsal room.

Being in a band is ace. I hope to be writing and playing songs til the day I die and I hope to do more touring both here and overseas. One thing lockdown has brought home to me is how much I love to get out and see the world. It would be sad if we had to stop that completely for a while.
Facebook.com/thmptypg
www.Theemptypageband.com
5 Quick Questions