on May 30, 2020
I was absolutely delighted to do a remote interview with one of my favourite Riot Grrrls, Marissa Paternoster of The Screaming Females. 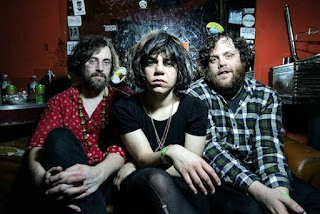 "Vestiges of the groundwork Riot Grrrl laid down exist in every corner of the punk community that I have been lucky to be a part of, and I think it's influence will continue to grow and transform in ways that will raise up the voices of ladies, women, girls, LGBTQ people, POC people, and all the disenfranchised people who have been systematically denied space to participate." (Marissa Paternoster)


I discovered this group thanks to a friend of mine and, after an hour of talking about them in the pub one night, I came home and checked them out, loved what I heard and have gradually been gathering their back-catalogue.

My love for the band intensified when I found on YouTube their cover version of 'Because The Night', written by Patti Smith and Bruce Springsteen. But this isn't just a band doing a cover, they team up with Garbage and the two bands produce something which can only be likened to near musical perfection, with Marissa providing her take on the solo and shredding like a master!! The vocal combination of Shirley and Marissa is second to none.

They have released several studio albums. Rose  Mountain is one of the pinnacle works of their career and I particularly like their live album 'Live at The Hideout' which was produced by Steve Albini and Timothy Powell—"who spent those 2 nights in Powell’s “Metro Mobile” truck (a control room on wheels), which was parked in a snow-covered alley, behind The Hideout." according to their Bandcamp page.

Here's what we talked about:

Just wanted to start off by asking how things are going for you during lockdown?

M: I mean, you know, it's a nightmare. Not being able to play shows or have band practice has essentially transformed my life into a journey that feels like it has no purpose. I think the hardest part to deal with is that there isn't a solid end in sight.

Have you, Jarrett and Mike been able to keep in touch and are you able to keep creating together/individually?

M: We've exchanged a few ideas via email, but beyond that, there isn't much we can do while under shelter in place orders.

How has The Screaming Females changed since you went under the title Surgery on TV?

M: Surgery On TV didn't last very long. We were very young and all of the members had very disparate influences, so the music itself was quite odd. I think Screaming Females focuses more on crafting good songs with thoughtful compositions.

You self-released your first two albums. What advice would you give to a band starting out with no label backing? And what has it meant for The Screaming Females being signed to Don Giovanni Records?

M: Well, normally the advice I would give is: go on tour, play every show that you can! But now...well, I'm not quite sure what advice to offer. Bands really don't need the backing of any label to share their music with the world, especially nowadays. It sure helps, but if you really care about what you're creating, you'll ship it out on your own. Don Giovanni Records has been very supportive of our band and provides us with many invaluable resources, but at the end of the day what really matters is hitting the road, playing gigs, and cultivating community and togetherness.

You’ve worked with some amazing people, Garbage, (btw LOVE your version of Because the Night!) Butch Vig, Steve Albini, not to mention all the fantastic bands you’ve toured with. What would be your favorite memory to share while sitting around the campfire with friends?

M: On our last tour we had to drive two hours after a Denver gig to a Travelodge in Wyoming, to make it to Salt Lake City the next day. This is a long story and it'd be difficult to describe the nuance of its exceptional strangeness without telling it in person, but the receptionist that checked us in was supremely odd. Not sure what was going on with her, but when we walked into the lobby she was mopping the carpeting hallway with a wet utility mop. While checking us into the room, she referred to Mike as, "Mr. Lego Man" and proceeded to let us know what a "bad time" it was to be in the city. It was around 3:00, so we laughed it off and were eager to get to bed. Once we had settled in our room, we heard a tapping at our window. I think it was pretty obvious that it was our receptionist, but we've experienced a lot of weirdness pertaining to our lodging in the past (plus we had to get up in three hours) so we tried to get to sleep. Thirty minutes later, the land line in the room rang. I picked it up, and it was our girl. "Sup?" she asked. Flabbergasted, I replied, "Uhm, well we're going to sleep" then - and I shit you not, she said, "WHAZZZUP?" to which I replied, "We're going to sleep!" and then she said, "Ah, dang it" and hung up. Needless to say, we packed up our things and left.


I read in Premier Guitar Mag that you felt that Riot Grrrl helped you to believe that you could be in a band. What does being part of the Riot Grrrl community mean to you? Where do you see it going in the future? And who are your favorite Riot Grrrl bands?

M: Riot Grrrl will always hold a big place in my heart. I thought that it was a movement that had come and gone, so I often wished I was born earlier so that I could have participated. Luckily, I was wrong! Vestiges of the groundwork Riot Grrrl laid down exist in every corner of the punk community that I have been lucky to be a part of, and I think it's influence will continue to grow and transform in ways that will raise up the voices of ladies, women, girls, LGBTQ people, POC people, and all the disenfranchised people who have been systematically denied space to participate.


You've been posting some amazing drawings on Instagram. Do you wanna tell us a bit more about your artwork?

M: Oh, I don't know if there's much to say. Right now I'm working on illustrating a graphic novel that was written by my friend Joe Steinhardt, who also runs Don Giovanni records. That takes up most of my time here in lockdown.

What can we expect from The Screaming Females once the lockdown has lifted? Do you think you’ll make it over to the UK sometime in 2021, maybe?

And finally, this question comes from one of our readers, Jonathan Tarplee… He’s seen your instagram posts recently with your dog hanging out of your rucksack. He wants to know “When you eventually get the chance to go on tour again, who will look after your gorgeous little dog?”

M: The gorgeous Little dog in question is "owned" (she can leave whenever she wants) by my roommates and myself. So we all take care of her!