"I am in the process of writing a new collection which is a queering up of characters from Grease!" 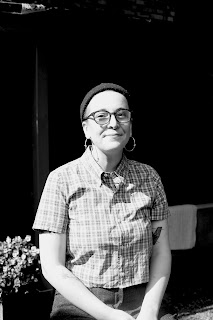 Hello! I'm Bridget, or B, I am a performance poet in the punk scene

Who or what inspires you?

I'm most inspired by the people around me, making changes at a local level. I'm from Bristol so our scene has become very diverse and queer leading over the last few years and that comes from a lot of work and organising which I'm proud to have been part of. Musically, I'm inspired by Jack off Jill, who have been my favourite band for nearly 20 years!

What has been the highlight of your career so far?
Hm.. publishing my first collection with Burning Eye Books and featuring on Atterkop's latest album From The Cradle Gently Rocking with a song about the boys' club of punk.

What challenges do you face?

As a poet performing at a punk show, you have to be able to hold a crowd, and not get distracted or disheartened when all you can hear is people talking. It's fucking rude, but hey, it's a gig and people want to socialise too. Now I always ask people to not have conversations at the beginning of my set.

My instinctive reply is 'survive', but I would love to go on tour again, it's been ages!

I also co-host a DIY queer punk podcast called Chips and Beans with Cassie Agbehenu (Glud, Fight Rosa Fight) you can find it on soundcloud, spotify etc. I am also in the process of writing a new collection which is a queering up of characters from Grease!