on April 07, 2020
During Bandcamp's commission free days, I picked up a number of goodies on the site and grew my collection.  Mainly focussing on bands I know or know members of, I supported my friend's music by getting as many as their tracks as my meager budget allowed. 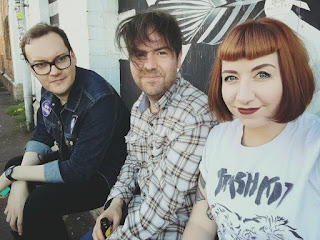 First on my list was Hot Boys on Campus by The Exotic Pets.  I'd met drummer, Becky, at a Die Das Der gig in Birmingham last September and we also ended up with after-show drinks at Sleater-Kinney in Manchester in February.  She's a true riot grrrl through and through.  We spent our time talking Bikini Kill, Zines and Riot Grrrl ethos!  I'm excited by the music that she and the Exotic Pets are producing.  So far, this is the only track they have available on Bandcamp but I'd certainly watch this space for some more.  It's a great track.... the hook line gets in your head right away.  It's noisy and unforgiving.  Punk rock supreme.  Check it out!