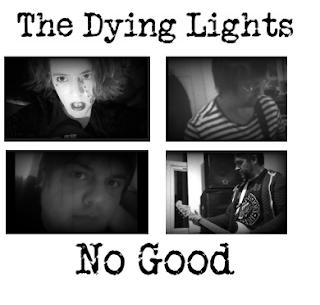 A few months ago, I was asked to join local band, The Dying Lights.  Their singer had just left to concentrate on other musical projects and I was delighted to receive the call.

Guitarist Derek and I gelled straight away.  We both have pretty off the wall tastes in music and we like it noisy!  We set about working on some new tunes and I learned some of the old ones.  Derek had been creating this track for a number of years but hadn't managed to get it totally down.  I joined in and with a small key change, brought some of my own spirit to the song.  I added a few of the lyrics and adapted some of the melodies to suit my voice (and the bit of screaming), but all credit here to Derek for writing this absolute gem of a song.

We got together with Tim and Glyn on a cold January day at Glyn's pad a.k.a Colossus Productions and annoyed the neighbours for a few hours while we put the finishing touches to the tracks these guys had already recorded.  It was a blast.... lots of lovely cups of tea and seeing Glyn was doing Dry January, I came away with a much-appreciated six-pack of beers.

Derek and I, even though we are in lockdown and can't get together in person, are working on some new tunes together via the magic that is the internet.  We hope to get enough tracks together this year to release as a physical EP, but for now, 'No Good' is available for streaming on all the usual channels.

I'll leave you with the video, which I made while self-isolating, with some snippets of videos we'd taken while recording the track at Glyn's.  It's my first attempt at producing a music video, but it's true to my DIY punk ethos!  We don't need a big budget, just a few handheld cameras and a cheap editor.

We were also really pleased to have the track played that night on Dawn Reck's NBR Alternative Music Radio Show and I was honoured that she referred to me as sounding like Garbage's Shirley Manson!!!  Thanks Dawn!


Please help support my new band by purchasing the track from bandcamp on mp3.


Or give us a listen on Spotify

Stephanie Burgess is one of the original riot grrrls, having played in bands throughout the 90’s. She currently runs her own fanzine and blog ‘Marina is Red’, which forms part of her postgraduate research into female representation in the Spanish alternative music scene, but also covers Riot Grrrl and feminist bands from throughout Europe. She is an avid fan of rock music and has an extensive record collection dominated by female musicians. She can still be found most weekends flicking through the vinyls and CD’s at her nearest music shop.
Instagram: @marina.is.red
Twitter: @marinaisred
Facebook.com/marinaisred