on February 15, 2018
Great news people of the world! You no longer need a penis to enter into the Classic Rock Hall of Fame. This is great news for all 'non-penis having' individuals in the rock world and gives hope to us all that our genitalia no longer influences whether or not you are remembered for your musical talents! I do joke, of course, dear reader, but this is what popped into my head when I saw this month's publication of 'Classic Rock Magazine'. Their latest edition is dedicated to 'Rock's First Ladies'. Quite a turnaround, given what they were posting on Facebook a couple of months ago. Let me explain... The popular music magazine put a video on their page last December called: 'The History of Rock in 15 minutes' and commented '348 rock stars, 84 guitarists, 64 songs and 44 drummers...". Intrigued I watched the video. 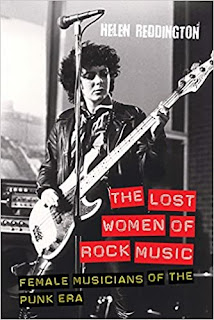 My heart sank. I watched the video again. I got angry. I watch the video a third time and exploded. "348 rock stars, 84 guitarists, 64 songs and 43 drummers of the male gender. 1 female drummer (unseen but heard, at least). Talk about females being underrepresented in the recording of rock history.. This video is the worst. Shame on you Classic Rock Magazine for supporting it.

😡.... ...The only two females that clearly appear in the video... one is wearing very little.. just a thong leotard and the other is throwing a boomerang. Not one clear shot of a single female musician." I ranted on my own page. I commented something similar underneath the video and got a couple of replies. One guy told me "Calm down, Pussycat" (I blocked him... mainly to save him from a barrage of insults I was thinking of throwing at him, no Steph, that reaction never works... 10 deep breaths, in out... in out... etc.) This was another commenter's response:

"How many Led Zeppelin-sized, female rock bands are there? Who're the female Beatles? The female equivalent of Chuck Berry? Which female artist was Elvis competing against for the top of the charts? Just to avoid (deliberate) misunderstandings, I'm not saying female artists are no good, but in rock, there's just not that many hugely influential acts. Soul, pop, jazz, yes, but rock, not so much. If it's not there, you can't make it up just to fit today's mandatory quota of PC feminism." (M.Pold)

His words turned and turned in my mind. Crucial to this is that he truly believes that there is no female equivalent in rock history to the bands and artists that he mentions. But there must have been female musicians since, well, the dawn of music. It's not like boys are born with a natural talent for music that women don't have. You don't need male 'equipment' to pick up a guitar or play the drums (although that would be funny to see). I've seen women rocking the stages since I found the music industry back in the 1990s, so his words just didn't sit right. But, then I wondered why I couldn't pick out of my brain Led Zepp's female equivalent or The Beatles/Elvis' female rivals. So I did some digging. Helen Reddington's book 'The Lost Women of Rock Music' jumped out at me from the shelves of my university library. She points out, that "The rock press had a vital role in the bestowing of authenticity to music" (Reddington 2007). I'm not going to summarise her work here, read it yourself if you are interested, but it helped me to realise why some bloke that may have only read magazines like Classic Rock Magazine (who hasn't had a single female on the cover for the last four years), as his source for new music, may believe that there are no female equivalents and why, over the years, important female musicians have been 'lost'. If rock magazines are only bestowing authenticity onto male rock bands, by giving them a place on the cover, or featuring them in 'The History of Rock in 15 minutes' videos, then it doesn't take long for the 'unauthentic' bands to disappear, or get forgotten. What it boils down to is underrepresentation.

If you don't talk about female bands, then people will forget that they were around, they will fade out of the history books and won't take their seat in the Classic Rock Hall of Fame and I fear that this underrepresentation has been happening for so long that it has meant so much has been lost. As Catherine Strong points out: "There is a trend within contemporary society for women to become invisible and be forgotten when the past becomes 'history'" (Strong, 2011) Take for example the following video of Rosetta Tharpe:

I had never heard of this woman until a good friend of mine shared this on Facebook a few weeks ago. It would appear that some of the 'forgotten' women of rock are gaining the recognition they deserve thanks to YouTube, other forms of social media and a few individuals who dedicate time and effort into making sure the memory of these people is preserved. If it is the case that women musicians were dismissed by the mainstream music press during the initial decades of rock and roll then, we can't really say how many more female musicians were out there, being as amazing as the Beatles, being as heavy as Led Zepplin and, as shown by Sister Rosetta Tharpe, being as talented and groundbreaking as Chuck Berry. I don't have the answers to M.Pold's questions, I don't know who their equivalents were because I too have relied on some of the mainstream music press to keep me informed. I wasn't around in the 50s, 60s or 70s but I'm convinced there are a plethora of female artists that will come to light as people use social media to preserve their memory and, hopefully, give greater notoriety to those that we have heard of. Certainly by the 1990s, within my living memory, female rock musicians were getting slightly more press coverage. How they are 'remembered' (or forgotten), however, is worthy of a whole thesis, but I do invite you to consider what the term 'Riot Grrrl' does in compartmentalising female musicians away from the mainly male mainstream, albeit an 'alternative' mainstream and also consider the vilification that musicians like Courtney Love have received in that same music press. I would also encourage you to read Catherine Strong's chapter "Gender and Grunge" in her book Grunge: Music and Memory. Above all of this, though, I just think that it is a real shame. This isn't a feminist issue, this is an issue about good music being lost, tunes not being heard just become someone in the head office of a mainstream rock magazine decides not to run the feature on a female band because of what some marketing /sales statistics report tells them. I want to read that feature, I want to search out that band and listen to their music or go to their gig and yes, I want to see people of my gender in your magazine. So thank you, Classic Rock Magazine for representing some female rock musicians this month. I was genuinely excited to see your issue and I have bought it. I do fear, however, that your motive is more (as M.Pold says) about meeting some "mandatory quota of PC feminism" than an actual commitment to authenticate female bands by regularly featuring them in your telling of rock history. Only time will tell. Keep reading, keep sharing, keep listening, loud. Stephanie (C) Stephanie Burgess-Arteaga, 2018
Articles