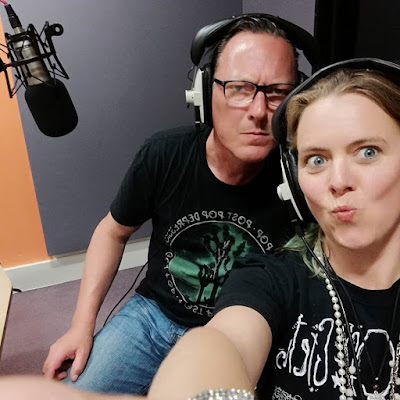 Ted and I were absolutely over the moon to be invited onto Kev 'Legs' Walker's radio show this week to talk about and play some of our favourite tunes from the 1990s. Kev's show, 'Recollections and Revelations' runs every Wednesday night from 6-8pm on This is the Cat Radio and each week he features a guest who gives him a list of songs. However, Kev keeps his final choices close to his chest and so we weren't too sure which ones he would go with, in the end. He kept us on our toes and it was quite fun, not knowing what was coming up! Like Christmas morning when you hope Santa has read your letter well and you don't just end up with a tangerine! So the final setlist ended up with the first tune that Ted and I played together live on stage; the song I played on stage right before we met in 1993; the riot grrrl bands that influenced my early music career; the many, many bands that Ted has seen live over the years. Oh, and we laughed. We laughed a lot! Great to go back in our memories and do what we do best, talk about music. Have a listen on the player embedded above and check out some of Ted's Tales too here on this blog.