on July 02, 2018
Introducing Ted's Tales. Ted has been on the music scene in the UK for many, many years and I'm excited to have him writing some of his tales for us here on this blog. We're kicking off with a Jane's Addiction gig from 1988. I'll hand over to Ted.... (Stephanie x) 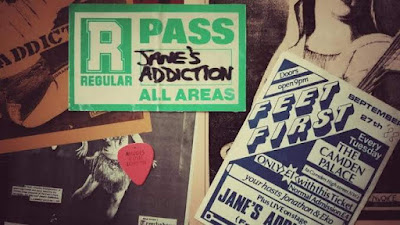 I scour the pages of the music press, religiously every week on the lookout for musical inspiration - attitude and image meant so much to me, but it's not just the look. There needs to be some kind of substance, sonically as well. One band that lit a fire inside me made their first trip to the UK back in Sept '88. Phil Wilding of Kerrang Magazine wrote "A musical distempered dog, you're never quite sure whether it will lick you or bite you" I needed to hear this band for myself. They looked proper freaky in the pic attached to the article. (Good start, I thought to myself). I make my way down to Camden on the train. I know it's going to be a late show. Got to crash somewhere? I land in London at 12:30. Why so soon? (I wanted to milk the day) Band turn up at tea time for the sound check and I gauped at them as they entered the place. I am sat outside 'avin a fag, listening to my band storm through a blistering version of Mountain Song at the soundcheck. I am freaking out with anticipation for tonight's show. I make an on the spot decision and tell myself that when they return to tour, I want to be all over that, everyfuckingwhere! And, guess what? I did it! But more of that later. It's gone 7 now. A door has opened into the foyer, the girl sets up for tonight's business. "When is the band on?" I ask. "Late, real late" "Fine, ta" She hands me a flyer, get in for a £1. Felt like a bloody golden ticket right there in the palm of my hand. (Pictured above) The band walk into the club - strolling past all the party goers - glancing about at the assorted array of costumes: leather, rubber and PVC on display. Perry wears rubber corset and long sleeve matching gloves for the show.

They hit the stage at quarter to one. I sit on stage directly in front of Dave Navarro: I am transfixed and transported away with my band. Forty-five minutes fly during which time a party goes on while the band perform. Exotic dancers all around, eye-popping entertainment on stage and off. This was an S&M type evening: Freaks, weirdos, a variety of eye-catching outfits on display. Girls dancing in cages, trapeze artists swinging overhead. To say that I felt uncomfortable would be an understatement but I'm pretty sure that Perry and the boys felt right at home. And face it, I was there for the music and these dudes from California took me on a sonic trip. Orgasmic tunes kicking out one after the other. A mix of goth, zeppelin, big sounds, soaring guitars, squealing vocals and solid rhythm section with a crazy drummer who was dubbed 'The Octopus'. I left the club blown away and completely mesmerised in the middle of the London night and heading back to Euston Station. My bed, a cold hard train station floor while I waited for the first trains to start running their daily schedule. To say that this band had a lasting impact on me musically is a bit of an understatement. They came back to tour the UK extensively in January and I think they got sick of the sight of me,but anyway, I befriended the swag guy at one of the earlier shows and ended up selling t-shirts as a way to get into the gigs for free. 'Ted just admit it' is a tune off the 'Nothing's Shocking' album. 'Camera got them images, Camera got them all. Nothing's Shocking' Ted x
Gig Reviews