on April 28, 2018
Broken Lingerie is an all-female punk band from Madrid made up of Rakhel, Ale, Sara and Raquel and are about to release their first album. They've been busy over the last months writing material for the record and playing gigs wherever they can.  They have played over 30 times in Madrid and throughout Spain, with Jorge Salán, Heavy Tiger, Thundermother y The Kendolls, but the most memorable concert was at the Surf Music and Friends Festival on Las Salinas beach in Asturias, where they played to over 700 people. 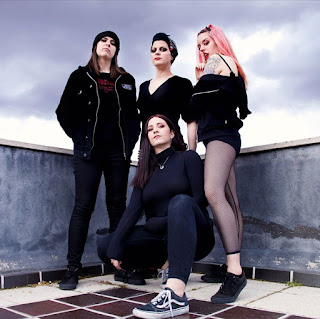 "We had a great time and there were loads of people there", the band told me.  However, they most like to play concerts that not only have a good atmosphere but that are also in aid of social causes, such as feminism or anti-racism, for example.   Their next concert will be on the 5th May in Madrid as a part of the Women Metal Mezcla Fest, a festival which aims to increase the visibility of women in the metal music scene.

"Our influences include metal, punk rock, hardcore, rock and roll, and we think that we're pretty open-minded when we play"
Their music styles are varied and the fusion creates their unique style.  "Our influences include metal, punk rock, hardcore, rock and roll, and we think that we're pretty open-minded when we play".  They are certainly leaving a footprint on the Madrid stages and are have been embraced by the underground network of bands present throughout the city.  "We've got loads of friends in groups such as: Estrogenuinas, Violets, Azote, The Royal Flash, Los Inductores and D.O.I, amongst many others". They are currently recording their video for the first single on their upcoming album and are balancing this between studying and working.  But it appears to me that what they put into the music is pure passion.  They told me that they aren't looking for any kind of approval, they just love to play and their dedication comes through in the music.
The few songs that are already available to listen to on YouTube show real promise and are causing great anticipation for the new material.  The band is hard and heavy.  "Crucified Decay" and "Lying Words" are heavy punk with fast rhythms, perfectly overdriven guitars, bar chords, deep bass lines and screaming but melodic vocal tracks. Their music reminds me very much of L7 and they capture the energy and spirit of the punk legends in their cover of 'Fast and Frightening' which is the perfect homage to the Riot Grrrl greats. https://www.youtube.com/watch?v=5yZfgxSQ0CI I'm more than excited to hear the new album and to also maybe catch a concert or two over the summer.  I had a chat to the band too about their impressions of equality in the music industry, but I'll keep that part of our conversation for my big project which you can read about here. For now, this band has definitely made it on to my favourites list and one for everyone to keep their eye out for.  So I'm off to put on some Broken Lingerie and get rocking! ;-) Thanks, Broken Lingerie for taking time to chat to me.  Good luck with the festival on the 5th May and 'suerte' for your new album... I'll be reviewing it as soon as it comes out.
Stephanie
(C) Stephanie Burgess-Arteaga, 2018 More from Broken Lingerie