on April 21, 2018
D'Baldomeros are starting the spring in style with the release of their new single, 'Dejame'.  They have spent the winter months in the studio recording the single with producer Isra Bizarre, which comes on the back of a successful summer playing festivals like Bull Music Festival and Granada Sound 2017. 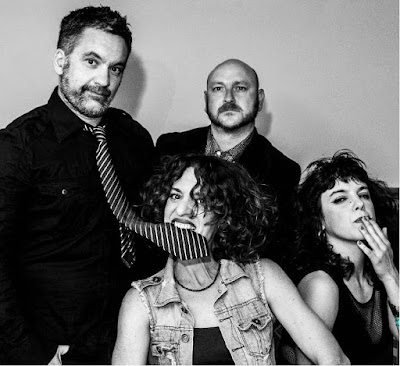 They further established themselves as the summer sensation to look out for by winning the Quiskilla Rock 2017 prize. A perfect mixture of electro-rock and funk, the band's sound is one to jump around to.  The band never stop touring and the feedback from event goers, organisers and reviewers has been awesome.   They love to play live and are optimistic about future events:  "Our [best concert] is still to happen.  We love to play in places where the spirit and culture of live music is evident" They have a number of dates lined up and are honoured to be playing with other bands such as Montrouge and Porygon in Sala Planta Baja in Granada at the end of the month. Their new single, Dejame, is being talked about in the Twittersphere and the reaction has been fantastic.

Personally, I love the fusion of sound.  It is pop, but also quite rocky.  The melody line on the chorus stays with you long after the song has finished and the beat stays firmly in your head and your feet.  True to any funk band, flanged up guitars through wah wah pedals accentuate the dancey rhythm.

And there is more to come. This single will form a part of the EP which will be released over the summer and they have in the pipeline some gig dates. Follow them on twitter to keep up with all of their news and updates. Thank you to D'Baldomeros for taking time to chat with me about my project. I look forward to including their opinions and experiences around social themes in music in my research.
. Thanks for reading Stephanie (C) Stephanie Burgess-Arteaga, 2018
Artist Profiles Spanish Music Top Tracks