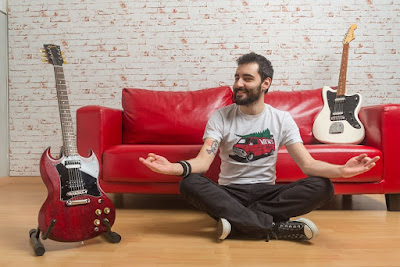 From the working-class neighbourhood of Vallecas in Madrid, 'Contigo en Contra' is a project created by writer and composer Diego Vazquez. In 2013 the first album 'Cada Loco Con Su Tema' was released with five songs that established Diego as a serious solo artist. But it would be a long journey until he found his true sound. He set about creating, writing, composing one song after another, releasing a fourteen song album in 2014 'Cosas que Pasan' and just a year later a 6 track EP 'Sexo, Droga y Rock & Roll'

By 2016 he had discovered a sound that he felt completely comfortable with.

His EP 'Antitesis' only has 4 songs but it took him away from the influence of west-coast USA artists like Blink-182 and Nirvana and drove him deeper into a darker hard rock/ metal sound. Distorted and clean guitars mix in with a deep, double bass drum. The melody expressing pain and resignation with each verse. But it was the first time that Diego really felt that he could express himself without limits.

And he is great at expressing himself without limits, no holds barred. Diego and I had a chat about my project, which is a postgraduate investigation into gender roles and the influence of social media in the Spanish music scene.

Like many others who I have interviewed, he recognised the need for more visibility of women throughout the whole music scene. The inequality is like a 'brick wall that is difficult to break down.', he told me. He sees that many women would haven't been given the 'opportunity to go up to a professional level', just for the fact that they are a woman. But concluded saying that he was committed to fighting against this level of inequality in all aspects of music. But maybe, as Diego points out, the problem doesn't completely lie within the alternative music scene, where many like Diego are open to the idea of complete equality. Maybe it is in the marketing and commercialisation of the music industry at a mainstream level, where the idea of 'celebrity' is often more highly appreciated than the actual talent of the musicians and singers. Again, where social networking sites are concerned, he said, that it is easy to reach more people without having to spend money, however, those who do have money to invest, in other words, the big record labels, will be able to buy a better position and be more visible throughout the networks.

And what about the future for Diego and his 'Contigo en Contra' project? His latest album is again a change in direction for this artist who never ceases to find a new angle or a new sound to his music. "Each of my albums represents a time of my life and this new record is a representation of the 'before and after' of my music and of my frame of mind. Pure Rock and Roll in 1970's style is what lies underneath this 5 track album, with fast, dynamic and optimistic rhythms, that get your heart beating outside of your chest and gets you singing and dancing. 'TaquicardiaRock' expresses fully those feelings of euphoria and insanity of being alive".

He's still creating and will be releasing new material soon. We can only wait and see which direction Diego will take us with it. Many, many thanks to Diego for taking time out to answer my research questions and giving me the okay to publish his thoughts and opinions. I would like to speak to as many musicians as possible about my project, so if you would like to be featured here and form a part of this investigation, then please get in touch.