5 Rock Bands to listen to if you're learning Spanish

on April 28, 2018
As I said in my last article, Five bands you should be listening to if you’re learning Spanish, listening to music is an amazing way of learning a language. Not only do you fully immerse yourself but the repetition means that the new vocabulary and phrases stick with very little effort at all. 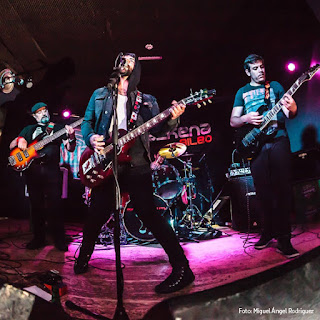 This article is for the language learner who tends to look for music outside of the mainstream and who is looking for current bands that they can identify with. All but one of these bands are currently touring throughout Spain or South America and recording new material as I write. For teachers looking for inspiration, I bring you a selection of music which includes some great new ways of teaching culture festivals, environmental issues, slang terms, social and gender issues and also using music as a way of opening the doors to languages beyond Spanish, with a tune that is offered in both Spanish and Italian. Your students will love you for introducing them to these bands.

From Sevilla in the south of Spain, the band 'Full' have recently been touring around Spain promoting their third album 'La Tercera Guerra Mundial' (The Third World War). Their music, a melodic blend of rock pop indie is pretty catchy and great for language learners to get a foreign language tune stuck in their head. The lyrics are very poetical, which is great for advanced learners, but also, the lyrics from 'Aullando', their first single off their latest album, are all written in the present tense and can be a really interesting way for even first-year students to begin to notice where and how verbs are used, without the complications of a mixture of tenses. https://youtu.be/eCq7zTelM2Q

Transmisión N from Madrid have just released their EP 'Todo Ha Cambiado' (Everything has Changed). Their very distinct style of rock punk is perfect for the rock fan language learner as the lyrics are easy to follow and, if you want to expand your language learning outside of just Spanish, well, then you can also listen to this song in Italian as they have two versions, demonstrating that rock music is a great way to cross languages barriers and make us feel a part of a wider global community. Also, this song is great for learning a couple of past participles! They're playing some dates this Spring throughout Spain. Have a look at their video and if you are a teacher, share it with your students. Also, check out my interview with lead singer Marky.

The Sexy Zebras are currently breaking the Americas with their high energy, get in the mosh pit and get stage-diving kinda music. From Madrid, they formed in 2005 and have been likened to Royal Blood in musical style. For the language learner, this band will introduce you to a wide variety of very colourful language as they tend to be very straight talking, direct and often use language to shock. For the sake of our younger readers, I've included a clean language track of theirs 'Vagabundos' from their album 'Volvamos a la Selva'.

The PL Girls are an absolutely amazing all-female rock band who broke gender expectations in the Spanish alternative music scene up until 2015. Their first album is all in English, but their second album 'Vamos a Arder' is ideal for the esoteric language learners as it covers all types of vocabulary associated with fantasy fiction. Their single 'Calaveras' is great for students wishing to learn some of the imagery behind the 'Day of the Dead' celebrations and can be used in conjunction with wider learning of Hispanic cultural events and festivals. Read about a talk they gave on gender issues in the rock industry. https://youtu.be/JORJrS8hqZ0

Mar de Fondo are from Galicia in the north-west corner of Spain. Their single carries the same name as the band. Meaning 'swell' the whole song contains lyrics relating to the sea, the environment and the weather and would make a great addition to any class or series of learning about climate change, for example. Mar de Fondo, the band had great success on YouTube for their unofficial anthem dedicated to their favourite football team, RC Deportivo de La Coruña . They are inspired by Audioslave, Soundgarden and other well known international grunge and metal bands. I interviewed lead singer Jesus Suarez about their music and you can read that interview here.

Thanks for reading. Feel free to have a look at my blog for suggestions of other Spanish bands and keep on checking back as I constantly update. You can follow me on Twitter and Facebook. Keep Reading, Keep Sharing and Keep Listening - to new music! Stephanie (C) Stephanie Burgess-Arteaga, 2018 Cover photograph rights belong to: Transmisión N