on March 20, 2018
From 2008 to 2015, the PL Girls rocked the Spanish stages with their own brand of hard and heavy punk rock music.  They were just teenagers when they met over the internet and got together to start rehearsing, but they clicked instantly.  Each one brought a different angle to their composing and soon they created a very unique sound that crossed some classic rock sounds of Joan Jett and Black Sabbath with later grunge and riot grrrl bands such as Hole and L7.  Their influences ran far and wide and the three albums that they produced during their several years together are a testament to this variety. 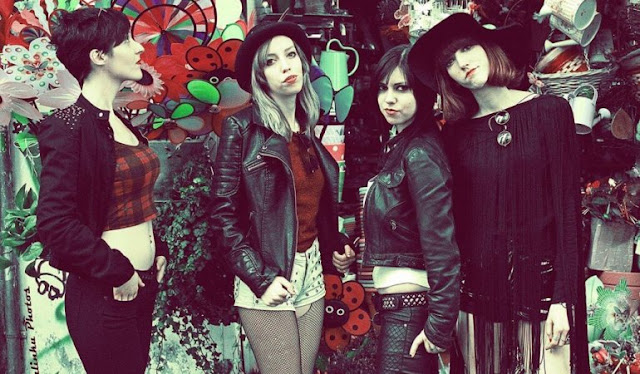 Skilled lyricists too, their debut album is sung in English and they really show us what they are about.  ‘Mad, Mad Girls’ pulls no punches.  Straight to the point “Anyway we are young, we are feeling so damn hot / We like fun and drinking shots, come and meet us, feel our show.” And with other songs on the album like ‘Lady Bitch’, ‘High Heels’ and ‘Shut the Fuck Up’, we get a good idea that these girls are going to tell it us exactly how it is.
With their second album, ‘Vamos a Arder’ (We’re going to burn), the girls return to their Hispanic origins lyrically, while maintaining the internationally recognisable alternative rock sound.
Their lyrics are darker, their messages more esoteric, with tales of witches spells and Ouija boards, mermaids and dark mirrors, unicorns and hell.  Their single from the album ‘Calaveras’ (Skulls) pays tribute to the Hispanic festival of the ‘Day of the Dead’ and we dance with them in the face of mortality.
Their third album ‘Hits de Carretera’, (Hits from the Road) pays tribute to the road trip mix tape legends. They mash up AC/DC’s Hells Bells with Jimi Hendrix’s Purple Haze to awesome effect.  They punk up and Hispanicise Sonny and Cher’s ‘I’ve got you babe’.  Other covers on the album include their version of the Misfits’  ‘Die Die My darling’ and ‘The Train Kept A-Rollin’ by Tiny Bradshaw.  Get the album downloaded and take it on your next road trip.