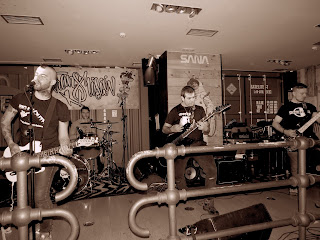 He started his musical career due to the strong influence that AC/DC’s Angus Young had on him, however, after playing in metal bands for a number of years, he decided it was time to release himself from constraints of a genre and see where a free approach to creating music could take him. For the purpose of this post, I can’t even label The Night Transmission as an Alternative Spanish band, as its origins go back to the northern Italian town of Turin. Marky had been playing with a metal band there for a while, but decided to leave that group to start a new project: ‘The Night Transmission’. "At first, it was made up of friends from other bands and a group of mates, and the truth is, it was a really beautiful time," Marky told me. "Were were full of dreams and we were all on the same path. The first thing we did was record a two-song demo, which opened the door to a small tour around Spain." Once back in Turin, Marky decided that he really wanted to be in the Spanish capital but felt that the band had to get down the tracks that they had been performing live before he went anywhere. The first full album ‘La Dolce Vita’ came out in September of 2014, a rocky album sang mainly in English that certainly feels more punk than metal with a raw guitar sound and fast-paced riffs.

Once in Madrid, forming a band was difficult, Marky told me. "Madrid is chaotic and scattered, the people are scattered and chaotic, and once again I was looking to get a band together." It was hard to get the combination right. The first attempt at ‘The Night Transmission’ Madrid, was relatively short-lived, but in that time they recorded their first album in Spanish “Fugándonos al Pasado” (Escaping to the past). Marky and the bassist moved on and soon found other musicians to work with and by 2017 had an established band to record another album and play a number of live shows with. ‘Zombie Urbano’ came out in February of 2017.

Away from the studio, The Night Transmission is a band that loves to play live. Marky admits that he’ll play live whenever and wherever they let him and has been known to just grab his guitar and play outside the metro stations in the capital occasionally. "At least I felt free!", he added. "The best places to play", he continued, "are away from residential areas, where they let you play really loud." However, the band has paid its dues. "Our story is more or less the same as other groups: playing gigs to halls that are sometimes empty, sometimes full and occasionally both!". But they are happy to have played some amazing concerts over the past couple of years, the most memorable gig was opening the evening at Moralrock festival in Madrid at the end of summer 2017. "The group's best moment was playing a gig at the Moralrock music festival," Marky told me. "We opened the night and played in front of around 700 people, I know that for many groups that's pretty normal, but not for us. What more, the audience really enjoyed the concert and we played really well. It was a unique experience for all of us"

Just last month, January 2018, ‘The Night Transmission’ released another studio album, ‘Todo ha cambiado’ (Everything has changed). A fitting title for this album as it shows just how much the band has changed since its metal origins in Turin. They have now established a unique and individual style that breaks with conventional creative labeling. And what the future holds only time will tell: Marky hopes to break into the Madrid music scene in a big way and get the whole band more involved in the creative process. Either that or "build a great big magnet that will attract a passing comet and blow the whole planet up", he joked. On a less apocalyptic note, ‘Todo ha cambiado’ is a great track. The band is proud to present their video for it on YouTube and have started showcasing all their new material at concerts throughout Spain. Follow them on twitter or bookmark their website to keep up with gigs and releases.  Hasta Pronto Stephanie (C) Stephanie Burgess-Arteaga, 2018
Artist Profiles Interviews