It was one of those evenings on the square in town, the nights were getting hotter and we were passing the time drinking some Alhambra Rojas (a very strong Spanish beer) and talking music. Original Malageño punk, creator and writer of Kamy’zine, threw that name Fausto Taranto into the air and it caught my attention. I’d never heard of them but he assured me that they were right up my street. A flamenco metal band that took the Andalusian traditional music style, which I’ve always loved, and fused it with overdriven metal guitars and deep rhythmic grooves. 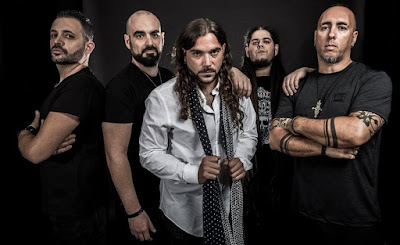 The next day the link to 'A Capa y Espada' appeared in my PMs: their most-viewed YouTube video to date, from their first album 'El Circulo Primitivo', and of the ninety-odd thousand views it has had, I’d say I’m responsible for a good thirty-odd thousand of them, all watched on that first day. Images flashed across the screen: Chains, black, darkness and an old battered room for the video location, all the ingredients for a perfect rock video. But this video was different: Not only is their ‘skull’ logo created out of a flamenco dancer’s hair comb, a ‘Peineta’, but the flamenco guitar, accompanied by Adrian Barros’ drums and Miguel Martinez’s rhythmic bass, lulls you into a recognisable reverie only for your preconceptions to be challenged by the fusion of two different music styles blending effortlessly. The combination really works. The band looks the part, all dressed in black, tattoos and long hair on show. Lead singer Ihmaele de la Torre’s broken, rough voice, sings out a melody which transports the listener through the less sunny side of Granada, into the shadow of the Alhambra where tourist eyes never see, the dark heart and earthy soul of the city.

The song kicks in before the first chorus and that’s when we hear the force and power of the band. Quini Valdivia and Paco Luque’s guitar section perfectly distorted, sufficiently heavy and loud. I was hooked. Passion is a word that gets used all too frequently to describe things that are nothing to do with real passion. However, Fausto Taranto epitomises a dark passion. It’s metal, it’s heavy, it’s sexy, it’s a long sweaty kiss with a deep lascivious moan. The lyrics warn of the dangers of getting too close, of being hurt by she who is like the sun, of feeling the pain upon hearing her melody, of fearing waking up next to her. Perhaps a metaphor, perhaps a fantasy, perhaps a life experience…..

By mid-summer they had released their second studio album 'El Reflejo del Espanto' and the band has since gone from strength to strength. During autumn of 2017, they played some gigs around the main cities of Andalucía, and finished an amazing year with a concert in Sala Tren, in their hometown of Granada. And 2018 is already looking really good for the group. ‘El Reflejo del Espanto’ has been selected by Mondo Sonoro Sur edition for one of the best albums of 2017, they have been awarded the Disco de Oro (Gold Disc) for 2017 by 'RockSesion' . If that wasn’t enough, they have announced their pre-nomination for Best Original Song for the Spanish film awards 'Los Goya', for their song 'Otra Letra Más', used in the film 'Yerma'. I’m looking forward to catching them live in Malaga at the end of the month, 27th January, in Sala La Cochera and maybe at later gigs, Madrid 21st April in Sala Live!